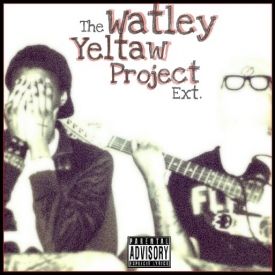 This past July Watley Yeltaw released his second full length project, The Watley Yeltaw Project Ext. The Rebel Soul member takes us on a defiant journey through his music. Anthony Cooper opens up the album with a poem titled “Rebellious Soul.” From there the journey begins.

“Open Bottle” (produced by MD) is up first and it quickly reminds me of Schoolboy Q’s “Blind Threats” (featuring Raekwon) with the production and prescription pills metaphors. “Advil” could’ve have stayed on a mixtape or the cutting room floor. It wasn’t needed. Next up is “Phantom” F/ Scratch (produced by Alex Megas) and if you’re not a Watley fan, this song will make you one. Up to bat after that is “Linez” (see previous review above). Following suit is “PKP Part II.” There is something about this track that makes me miss the old Kid Cudi. It’s a druggy song that’s beyond dope (pun intended). “Limitless” succeeds this cut (again see previous review above).

On “Homer Simpson” (produced by Rekuiem) the hook and beat are very catchy. “Dream” F/ Sir Steve-O (produced by ChrisK) is one of those songs that the bars are there, but the hook isn’t. “Storm” F/ Yd QuestJohn and Kaymi Kazi (produced by BakaontheBeat) is hard to get into because the beat hasn’t made up it’s mind on what it’s trying to do. “Keep On (Closed Bottle)” F/ Real McCoy (produced by IHop Borders) is a track that I wish Watley would’ve really spazzed on. It was like he was coasting when he should’ve went full throttle. Last but definitely not least is “Still Backtrackin.” Let’s just call “Still Backtrackin” “Water Street,” due to the bars on bars on bars (corny I know).

As a whole, The Watley Yeltaw Project Ext is a great project. It’s what I dreamed that a new Kid Cudi album would sound like. The production on this project had its ups and downs. However, no matter the beat, Watley sure knows how to get his point across. So if you are feeling rebellious in any type of way, download this album right now. Trust me it’s worth the bandwidth. -Pooh Bailey