Bad Boyyyy. Bad Boyyyy. Come out and playyyyyy. Take that. Take that. The B.E.T. Awards have come and gone for another year. There were some highs and lows, but one of my favorite highlights was the Bad Boy 20 year reunion. Complete with a few of my favorite gems, Puff Daddy (or whatever he goes by today) sure knows how to put on a show. Puff, Ma$e, The Lox, Lil Kim, Faith Evans, and 112 gave the award ceremony a Hip-Hop nostalgic feel. Especially with Lil Kim doing her iconic squat pose, which for a minute, made us forget she’s been cut more times than a deck of cards at a casino. The only problem with the set was, where was the rest of the roster? They don’t have weekends off? There were no minutes on their phones? Or is it because Diddy still hasn’t paid them? 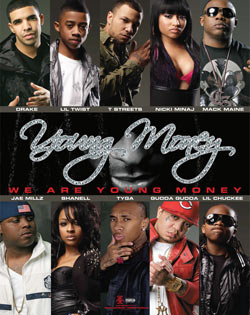 Death Row. Roc-A-Fella. Bad Boy. Murder Inc. No Limit. G-Unit. Just like Young Money, these labels too, have had their reign at the top. But just as Sir Isaac Newton once said, “What goes up, must come down.” And boy is it coming down. I’ve been watching Young Money for a few months now, because I started to notice the crumbling of their empire. Now if you’re a Hip-Hop head like me, then what’s happening in Young Money is nothing more than history repeating itself. Albums being pushed back, the workers becoming more famous than the boss, disgruntled artists, and so on. It’s been done. And a lot more entertainingly I might add. So lets explore Young Money and the repeating history.

Day26 stepped into the R&B world in 2007 and the collective has had a very interesting journey ever since. From being hit stars on Bad Boy Records and MTV to losing group members and disbanding; the fellas have been through it all. However, they recently got the net buzzing again when they announced that they were back together and ready to start fresh. They signed a new deal with BMG, will be dropping a new EP towards the end of this month, and are also planning to hit the road for a tour. To get fans reacquainted with what they are capable of, the guys are currently pushing a single called “Bulls–t.”
Continue reading

She’s Ryan aka SIR is a Brooklyn bombshell with a plethora of talents. She’s a former photographer and current: model, singer, songwriter, and rapper. Her goal is to utilize all of her abilities to build her entertainment brand to it’s maximum potential. She has successfully done so thus far by taking her alias SIR and turning it into an entity all it’s own via her music, merchandising, and social media. According to Ryan, SIR represents: power, confidence, and respect. Something that both men and women alike can appreciate.  Additionally, Ryan prides herself on having many layers and not succumbing to any label or category when it comes to her various art forms. When it’s all said and done, Ryan wants to be remembered as a successful source of leadership and inspiration.

OG Dutch Master is a rising talent from Baltimore, MD. He ventured into music, fashion, and graphic design at an early age to avoid going down the wrong path in life. His exposure to the Hip-Hop scene came from his job at a local boutique in Baltimore. The establishment hosted numerous rap cyphers and showcases, some of which included key artists like newest Bad Boy Records member Swagga Boy Los. OG Dutch Master worked behind the scenes at the events, keeping things organized and running smoothly. He used his position as an opportunity to learn the do’s and don’ts of the game. Additionally, he states that seeing Los go from rapping in a small venue to signing with a legendary company like Bad Boy Records is a source of inspiration. The other situation that impacted Dutch to take his music more seriously was the unfortunate death of his father. After enduring the hardships of growing up in B-More and suffering such a major loss, Dutch was ready for a change. He made his debut in 2012 and has been pushing full steam ahead ever since. Following his debut, OG Dutch Master went on to: release a mixtape, drop a few videos, conquer a couple of tours, build a respectable fan base, as well as gain some valid media attention and co-signs. His end game is to make a positive contribution to the already established Baltimore legacy through his passion for music and fashion.